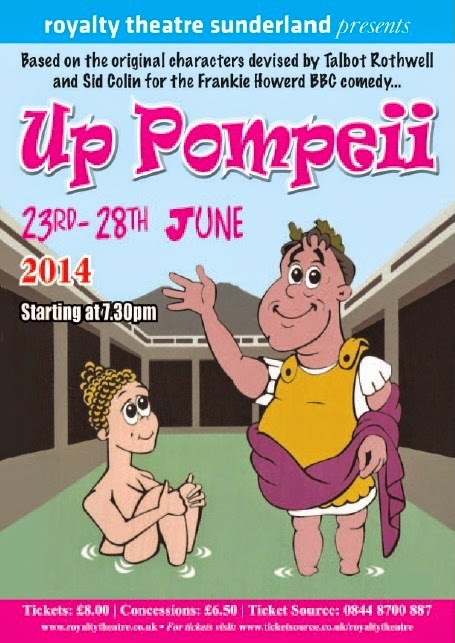 
The Royalty Theatre have chosen a corker for their season finale. And I have to admit I had mixed feelings about going along to it - here is another well-loved classic from TV and film adapted for the stage with all the potential to ruin some youthful memories. If you've seen my reviews of other classics such as "Dad's Army" and "Allo Allo", you'll know I viewed them with similar trepidation... Could any production of Up Pompeii do justice to it without succumbing to a half-cocked (ahem!) Frankie Howerd impersonation? I had more or less decided that I'd give it a miss, until a friend recommended it as a "must see". So I dragged my sister along and I'm glad I did!

I'm sure you all know the plot - Vesuvius is about to errupt, while a Roman senator, Ludicrus Sextus (Peter Kelly), and his family get up to all sorts of things they shouldn't, under the watchful eye of the head slave Lurcio. It is brim full of innuendo, double entendres and straight up smut!

There is a distinct pantomine atmosphere to it with a lot of audience engagement - characters cajole the audience to laugh at jokes, (or not!) depending on how good or bad they are. And some of them are awful!

There are a lot of laughs, and even with a fairly small audience, the actors build the momentum and keep the mood high.

David Farn plays Lurcio with quite a bit of ham, but, thankfully no half-cocked (or not that we saw!) Frankie impersonation. He made it his own character which was all to the good. Irene Lathan is suitably manic as Senna the Soothsayer, and I especially like Henry Cockburn (surely this was no coincidental casting choice??) as the unfortunate and iffeminate Nauseus, and Michael Luke as the very gruff  Capt Treacherus, adding just the right amount of machismo to the proceedings!

My only criticisms would be that The Royalty has a very small stage and there was a lot of scenery on there and, at times, a lot of actors which made it all a bit crowded. The final scene with its excellent special effects and sounds could be an absolute killer (pun fully intended!) as the volcano erupts but it just lacked a little bit of crispness in the execution which left the audience slightly unsure if it was time to applaud or not...which is a shame as it was definitely worthy of a longer show of the audience's appreciation.

Full of laughs, it is well worth the £8 entry. It runs until Sat 28th June. Definitely not one to miss! Thanks to Kathy for persuading me to go along!

For more reviews of theatre in the North East have a look at www.spikemikeisbreakingaleg.blogspot.co.uk
Posted by Denise at 10:29

Past Scribbles and Scratchings